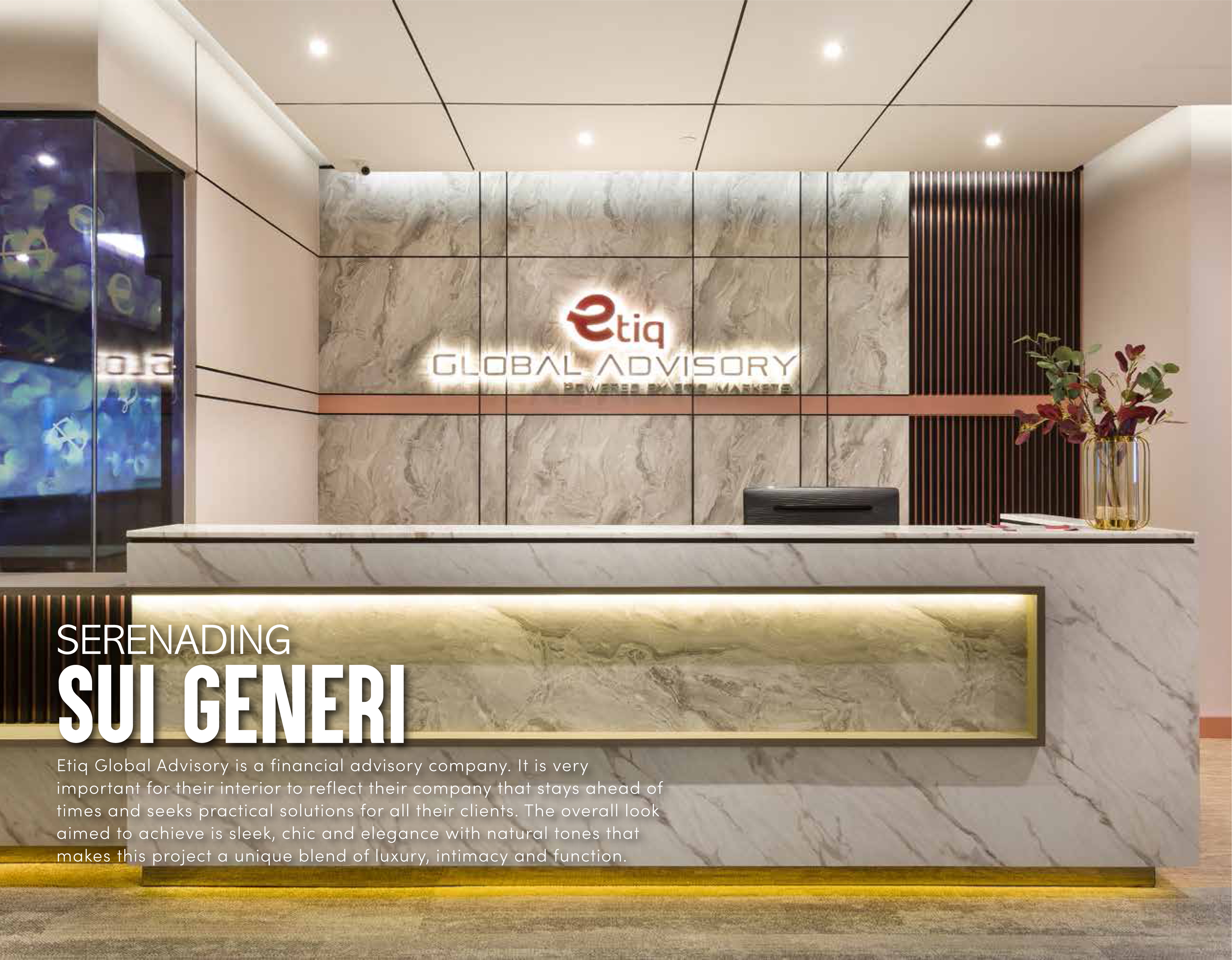 The reception counter is stationed on wood ef-fect stripe carpet tile and clad in Calacatta Extra marble with hidden lighting that gives interesting shadowing. On the wall, Avalanche White mar-ble slabs are used for its dramatic and dynam-ic visual quality. Etiq Global Advisory, the company name is placed on this wall, artistically underlined with a bronze metallic strip that leads to timber strips backed by a bronze metallic base. The rest of the walls are set in cream with orange plaster lines and black indents. This show-stopping effect is needed as a statement of the company’s confidence in their product. With these colours and little details, their company’s integrity and creative solutions are shown upfront.

Venturing left, an elegant open concept collaborative area. The panty is functional in grey and white cabinetry with steel corners. Two nooks provide a private zone where an individual is able to relax on comfortable white armchairs and utilise the modern side while balancing visibility and privacy. The rest of the space uses a collection of comfortable arm chairs of different shapes and col-ours for contrast against the white wall and creates changing sil-houettes with the blue bar stools and matching high tables with white table tops. The idea is to emulate the Kuala Lumpur city out-line as shown in the window decals in the private area and the actual skyline when the roll-up blinds are lifted.

The space on the right holds several discussion spaces and the man-agement office. Double doors open to an eight-seater boardroom. This room uses a mix of textured gold artiste paint and white lights to present a clearly visible room that is comforting to the eyes. Straight forward, the table is of simple hardwood that is surrounded by eight ergonomic chairs for optimum comfort during long discussions. Pan-elled walls of white are ‘write boards’ that work like white boards for the convenience of the employees. These sit on textured gold artiste paint, giving structure while the metal wall mounted décor brings the room to life. Both the private meeting rooms also feature the details from furniture to lighting and wall décor. The first office also has lux-urious white armchair that gives a touch of luxury, appealing to the subconscious mind of the client. The second office changes the tone slightly by changing the yellow painted wall to bright red. This smaller space also emphasises on décor with a brass foyer table and coat hanger in its niche. It gives out a feeling of intimacy when the client is invited into the personal space of the manager.

Like every other office, this project has an open space desk area for twenty-nine employees. Ergonomic chairs are used for their comfort and the simple design encourages the team to bond and work better together. This area is lit by customised pendant lights that are actually pipes in the workstation.

The seminar hall is designed for comfort with pleasant lights, clean lines and visibility of the glass board where else the side wall dou-bles up as the projection wall. Using fabric effects wallpaper to help soundproof the room, wood slabs and timber effect stripe carpet tiles are also used for the floor. The corrugated featured wall boards are used alongside stainless steel trimmings and black edges. This acts as a special sound insulation treat to absorb the echo produced. 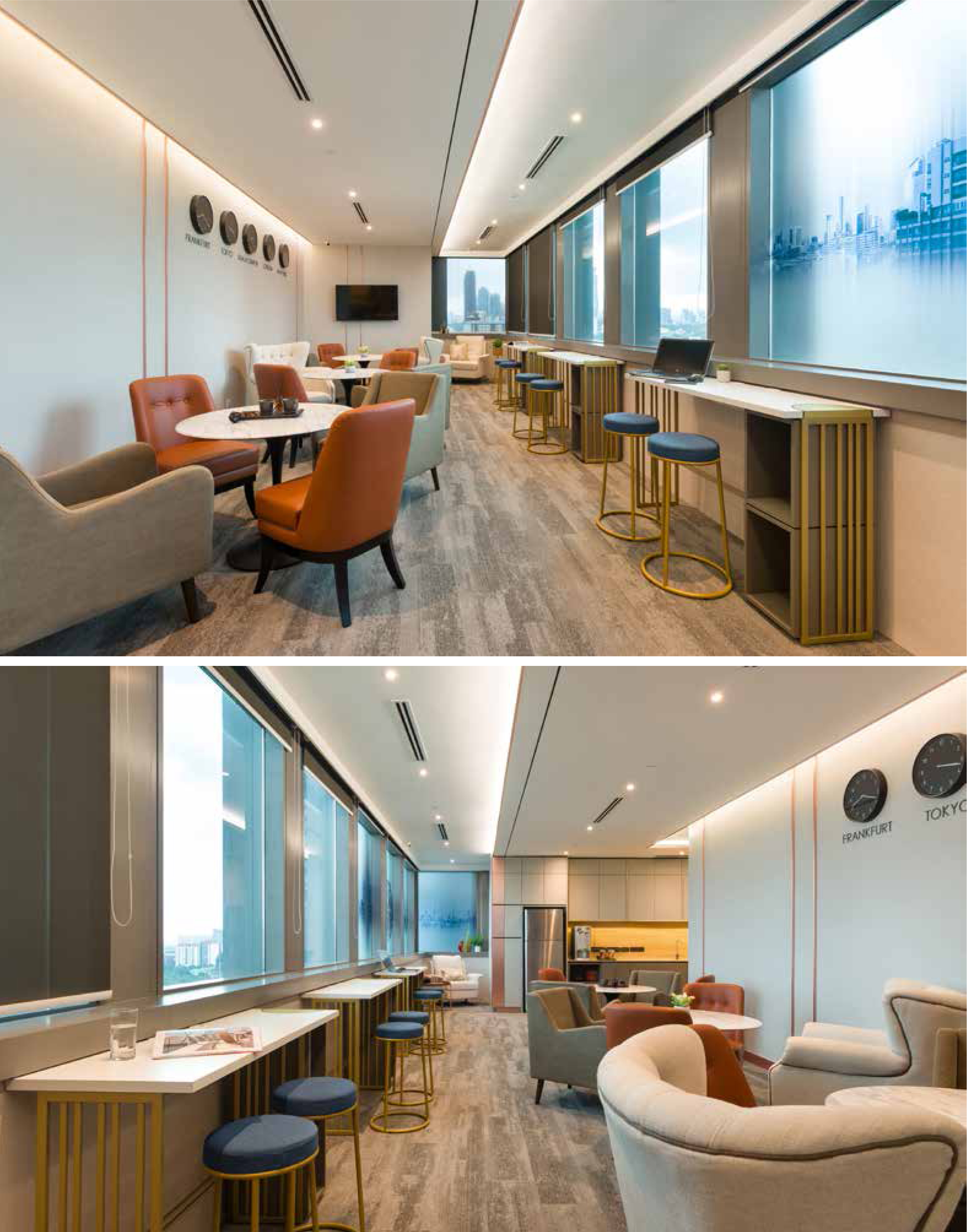 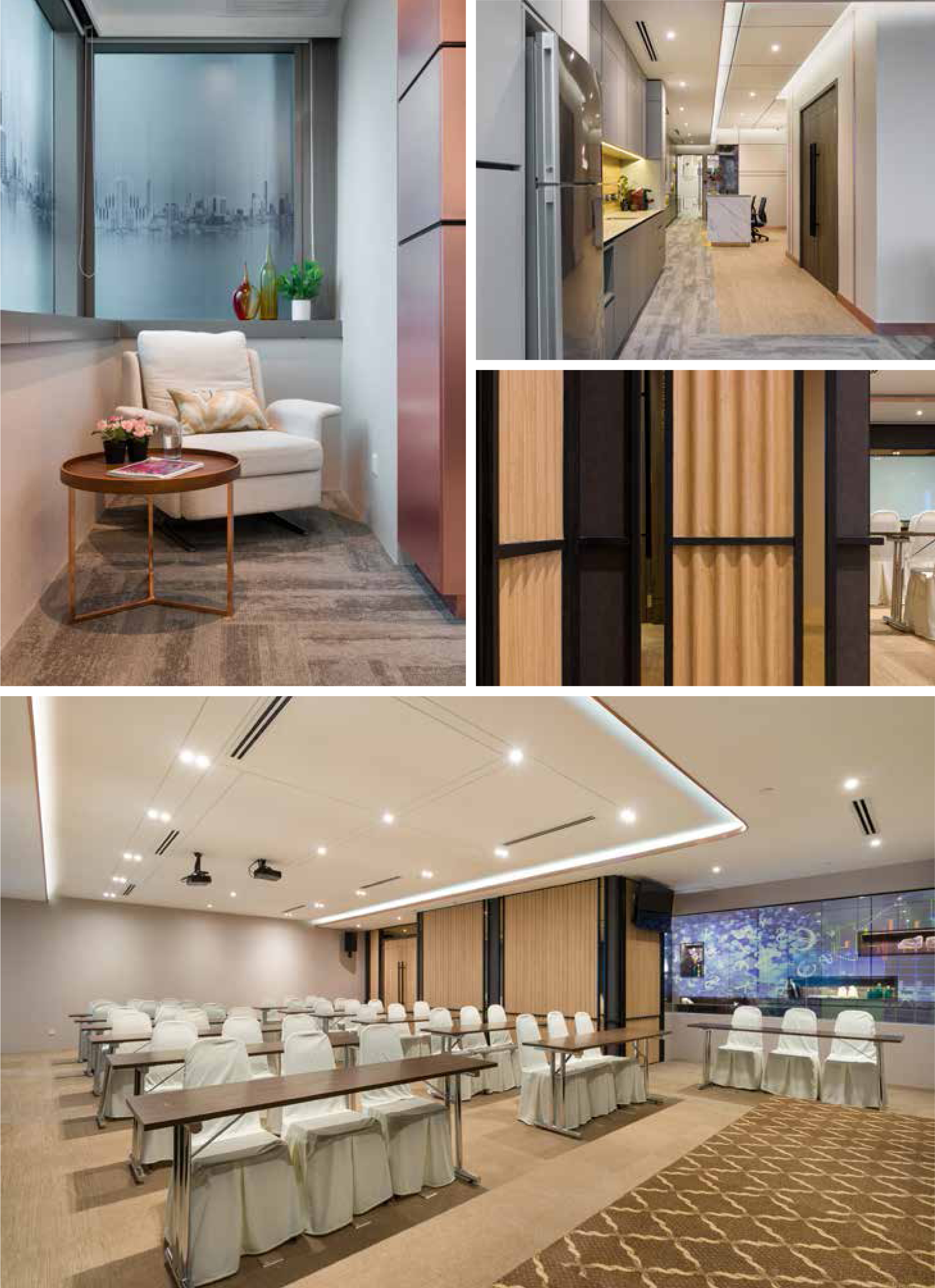 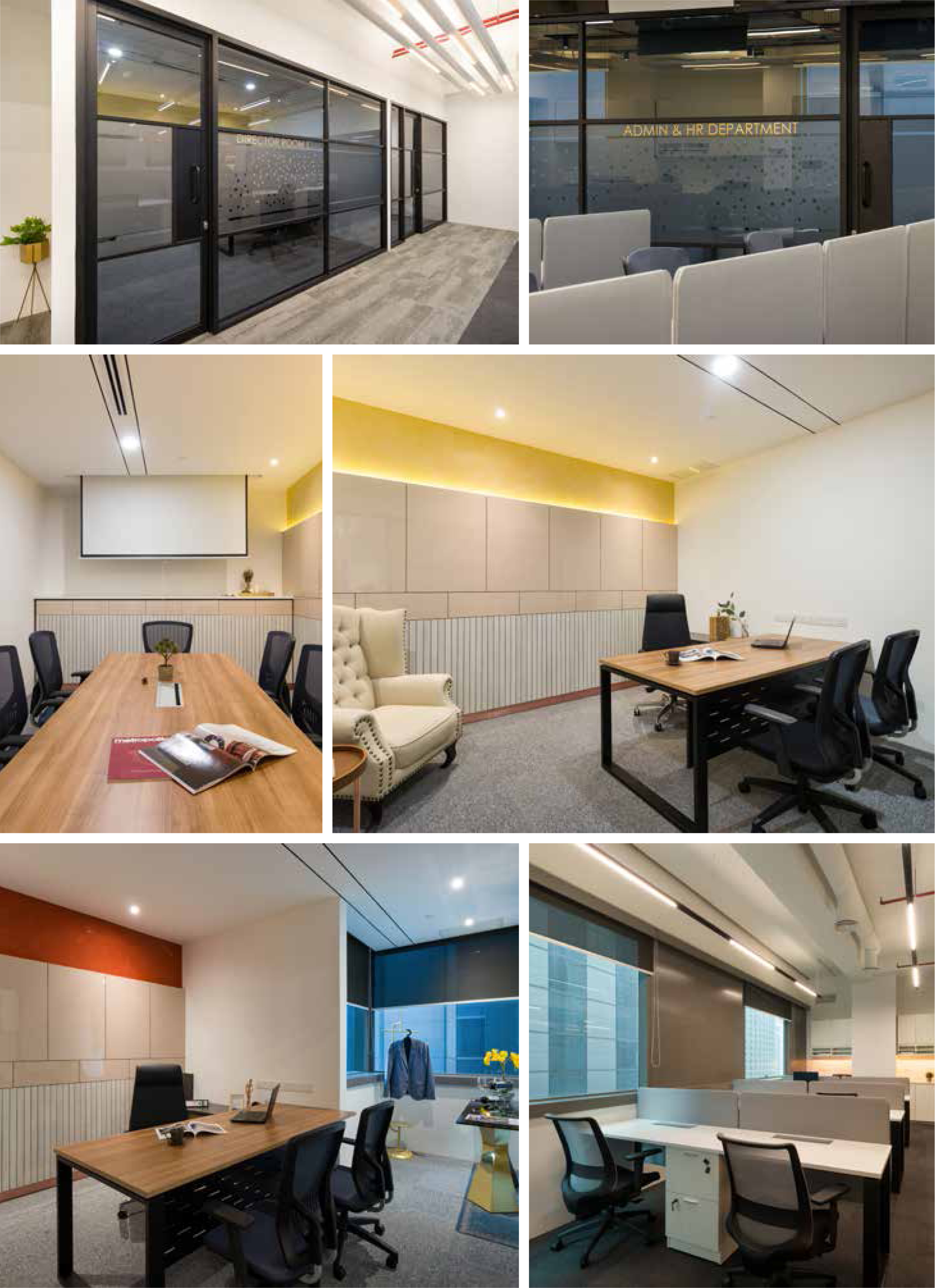 What can be deduced from grit and determination is that success also prevails no matter what and it evident in the case of Darren Gan, the founder of Ind’finity, the interior design firm that aspires to innovate the design industry. Hailing from Gemas, a small village in Johor where professional interior design services were almost un-heard of, Darren was exposed to the industry thanks to a relative in Singapore.

"Coming from a small town and being young, I didn’t know what in-terior design was, all I knew at that time if a house had doors, win-dows, hall, and bedroom and if the family lived together then it is a house. Then my relative brought back home interior magazines and I finally knew the chasm between what I knew and didn’t. I then made up my mind to learn more about interior design and build a beautiful home for my family,” reminisced Darren.

A graduate of Malaysian Institute of Art, Darren recalled that he was about 14 years old when he flicked through those home magazines and the stirrings of wanting to learn more arose. His first step was to enrol in a weekend Art class taught by a teacher who used to travel from Malacca every weekend. While the teacher taught them the finer points of oil painting, only Darren approached the teacher with the intent of learning sketching, 2D & 3D drawings.

“Though I was in the Science stream my heart was set on interior designing – after due diligence on the Interior Design course in MIA – I set off to Singapore and worked at a construction site for some work experience and it was an eye-opener,” said Darren. “I stayed on for almost 5 months and even though I wasn’t well versed in English at that time, I still survived. On weekends, I’d get on the MRT to explore Singapore and observe the ar-chitecture and interior design of malls, hotels, and beautiful buildings,” he added.

He completed his three-year course then land-ed a job in an Interior Design firm, where for the next 7 years he would learn the ABCs of the in-dustry by working in different stages of the de-sign and build industry. By the end of his tenure, he had not only accumulated experience but also a network that would later prove helpful when Darren started Ind’finity in 2009. These relationships that he had formed and nurtured back then helped him build his business by referring him client and giving him projects for the first few years.

During his start-up years, Darren used his home as a studio before setting up his establishment in KL where at present there are 11 members on his team. Doing both residential and commercial projects that come their way, Darren in his role as project consultant delivers the client’s brief to his team to allow the designers to bring the ideation to life.

“Our biggest challenge would be in 2020 when MCO was declared because a handful of projects were put on hold or even can-celled. It was tough and it still is as the interior design industry is a circle so when clients halt their projects other areas too become affected” said Darren seriously. “The only way to survive is to inno-vate and at Ind’finity that is what we did. During the MCO period, we launched dRuma – a medium cost interior design package to help homeowners still get their dream design,” added Darren who has also kicked off other initiatives that helps both homeowners and his firm.

A chalet or bungalows with plenty of water feature as his dream project, Darren loves architecture that ingeniously combines space planning with materials that make a space habitable, comfortable, functional while being aesthetically pleasing which his dream pro-ject would boast off.

Darren who enjoys outdoor activities with his family believes that winning awards and word-of-mouth measure equally to a compa-ny’s success, something he is blessed to have.